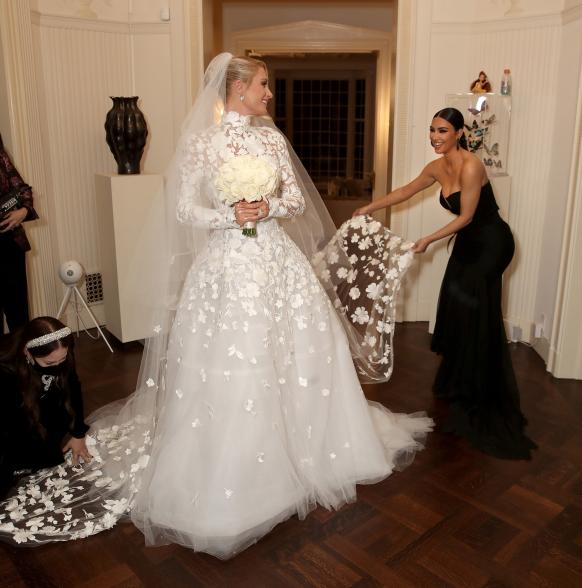 Paris Hilton’s A-list besties shared their excitement after the socialite revealed she and her husband, Carter Reum, secretly welcomed their first child together.

Hilton, 41, announced the news on Tuesday night with a sweet Instagram post showing the baby boy holding on to his mom’s thumbnail, which was painted light blue.

He arrived via surrogate, though it is unclear when. His name has not been revealed either.

Several celebrities took to the comments section to send their best wishes to the new parents.

“a BABY!!!!! congratulations so happy for you both!!” Chrissy Teigen, recently recently gave birth, commented.

“So happy for you guys!!! 🤍,” Hilton’s longtime friend Kim Kardashian wrote, to which Hilton thanked her and added that she is “so in love with [her] lil angel.”

“Congratulations to you both , biggest blessing 💙,” Naomi Campbell commented.

“Love you,” Ashley Benson added, as Hilton sent back love to her “sis.”

Hilton said in a statement Tuesday that becoming a mom has “always been” her dream.

“I’m so happy that Carter and I found each other,” she told People. “We are so excited to start our family together, and our hearts are exploding with love for our baby boy.”

The “Simple Life” alum and Reum, also 41, tied the knot in a three-day wedding extravaganza in November 2021 and previously discussed their intention to use IVF.

“[We’ve] been talking about kids since the beginning — since the first couple, like, months of dating,” she said in April 2022, adding seven months later that they had “tons of embryos … stocked up.”

Hilton does not have any other children, but Reum shares a preteen daughter named Evie with “Secrets of Aspen” star Laura Bellizzi.