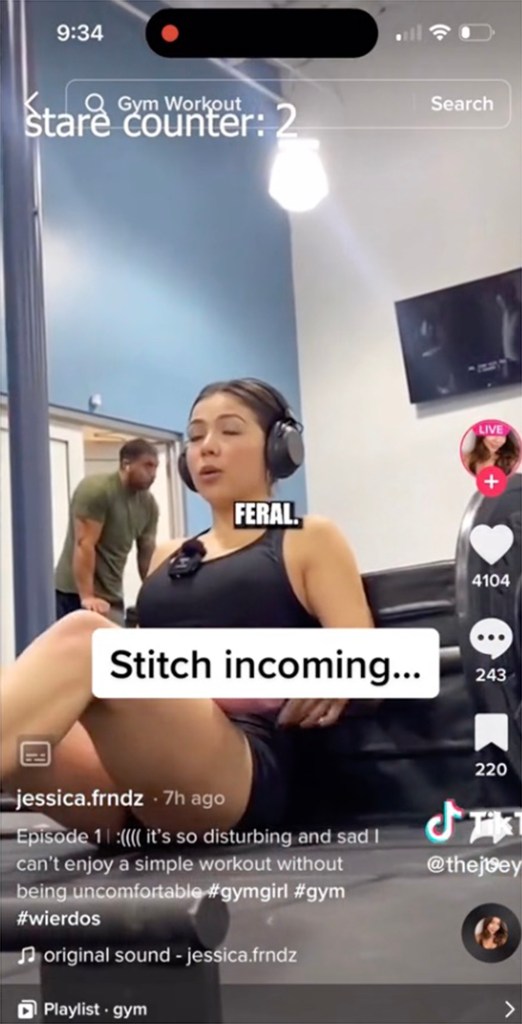 Twitch influencer Jessica Fernandez issued an apology Tuesday after she went viral for posting a video about a “feral” man at the gym who she claimed was staring at her “like a piece of meat.”

Fernandez published the apology on TwitLonger — an extension of Twitter that allows users to post tweets longer than 140 characters — calling the video “the most serious thing I have ever posted.”

“First of all, I want to apologize sincerely to the man at the gym where this all started. He didn’t do anything wrong to me and I blew our interaction out of proportion,” wrote Fernandez. “I know many people think that I’m only apologizing because I got called out from the video I posted and this is half right.”

The video — which has since been deleted — shows Fernandez lifting weights and complaining about a man standing behind her.

Fernandez then zooms in on the alleged “creep” who can be seen nearby and later offers to help her attach a plate to the barbell she is using.

The video also features several captions including “What if I just ripped his pp out of its socket so he can never reproduce again” and “natural selection better take these weirdos out.”

Fellow fitness influencer Joey Swoll called out the streamer saying that she “needs to do better.”

“Women are harassed in gyms and it needs to stop, but you are not one of them. An act of kindness or a glance does not make you a victim.” reads the caption of Swoll’s video.

Swoll suggests in the video that the man was simply trying to help Fernandez because he thought she was struggling with the weight and pointed out that she was in front of him and had her camera facing him.

“First and foremost, as I’ve said before, there is a big difference between staring at somebody and simply looking or glancing at them,” said Swoll.

“So why did this man look at you? Well, you’re in front of him, off to the side. You’re in his peripheral. You’re also taking a video with your camera pointed directly at him, and you’re talking to yourself. He’s probably watching you wondering, ‘What is she doing?’ Know I would.”

Fernandez reveals in her apology that she has been a victim of sexual assault and sexual harassment and that both events have left her “extremely” damaged.

The influencer also concedes that if she had not been called out, she wouldn’t have had a chance to learn from her mistake.

“After reading literally thousands of comments about me, the situation and the man in question, it truly opened my eyes to how damaging this could have been for him,” said Fernandez. “Men and women deal with very different problems in the realm of the opposite sex and after looking through the lens of an innocent man put in a situation like that. It honestly made me feel sick to my stomach with guilt.

“I think it’s important to call people out on their mistakes and, in the words of Joey, help them ‘Do better,’ ” continued the influencer. “This is exactly what I plan to do with not just my content but my life moving forward.”